During the AV Show 2019 SOYATON was  celebrating a premiere of it’s first line of high end audio cables (The Benchmark).

Despite of being a newcomer to the show SOYATON has been asked to deliver full cabling for two high end rooms/systems.

One of them was a beautifully arranged room of Aida Acoustics (speakers) supported by Fezz Audio and Muarah electronics. Sound of the system gained a lot of rave reactions and feedbacks and was also noted by multiple international journalists and critics.

The room was very frequently visited both by audiophiles, journalists as well as industry experts and professionals. 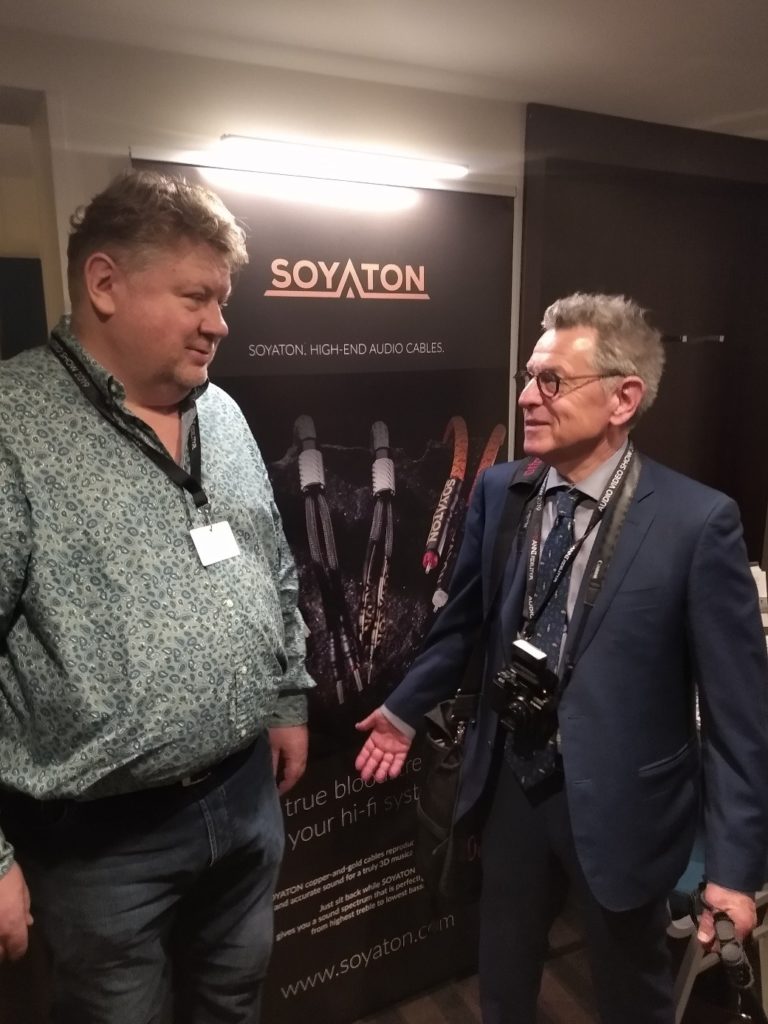 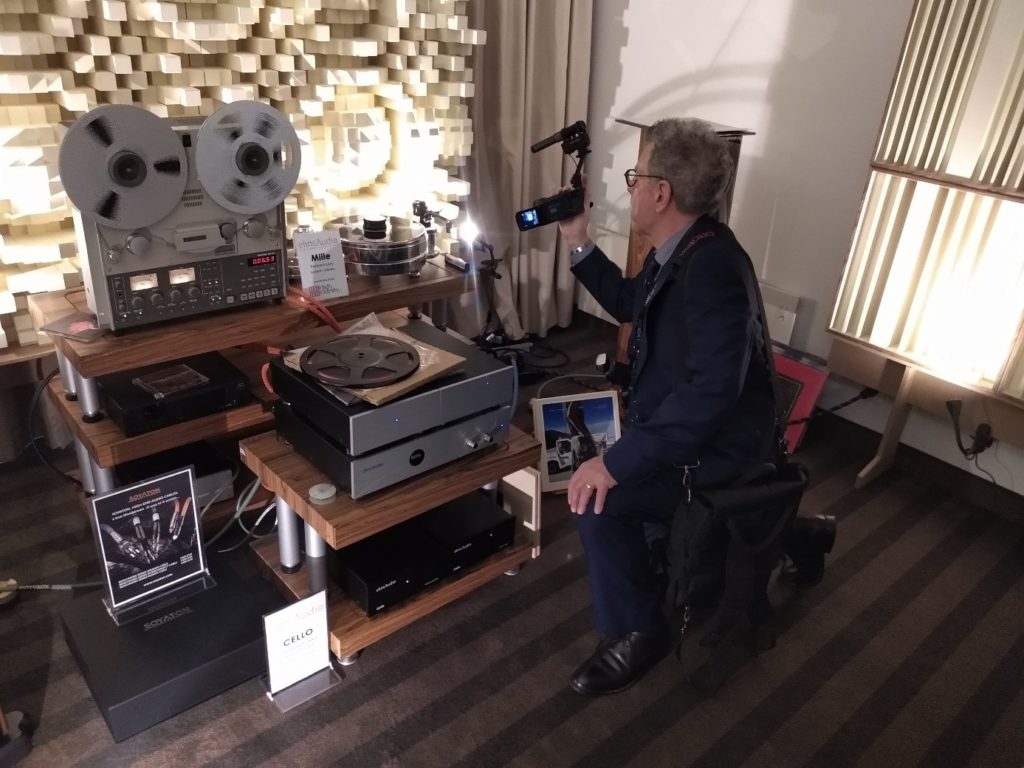 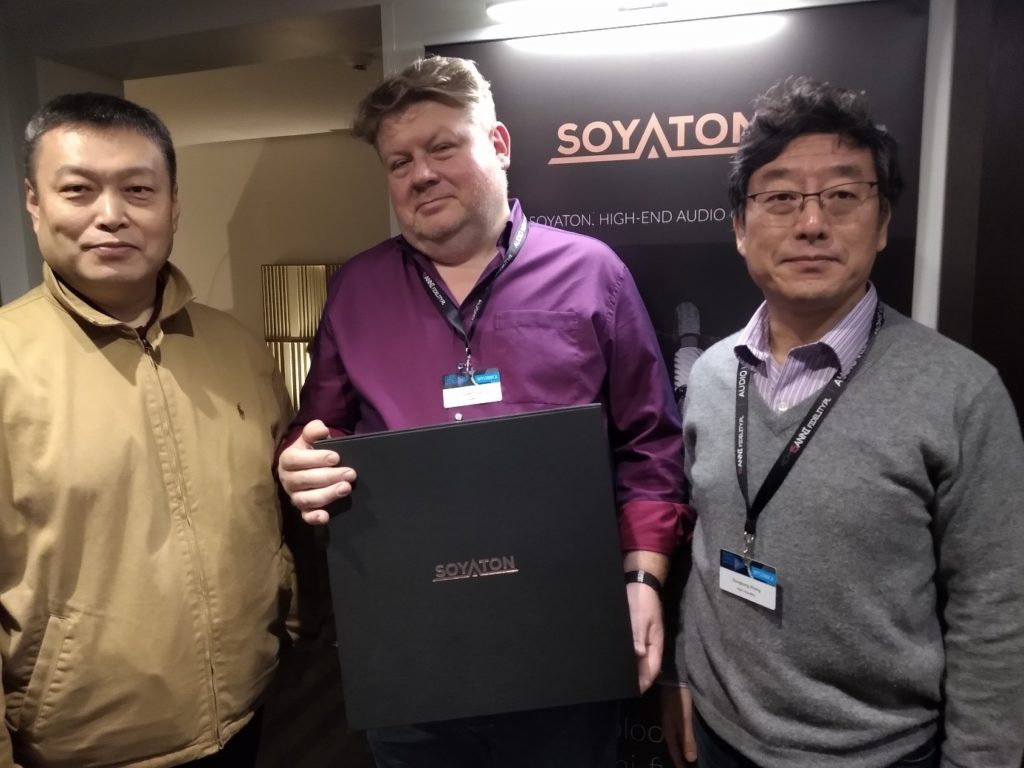 There were also very interesting (and very well crowded) events organized in the room – just to mention the premiere of analogue version of “Raindance” (mastered for vinyl by Sean Magee in Abbey Road Studios in London) or a meeting with a famous polish jazz musicians – Wojtek Karolak and Adam Czerwiński to celebrate the nomination for the Best Audiophile Recording of The Rocky Mountain International HiFi Press Awards 2019 for their album „In A Sentimental Mood”. 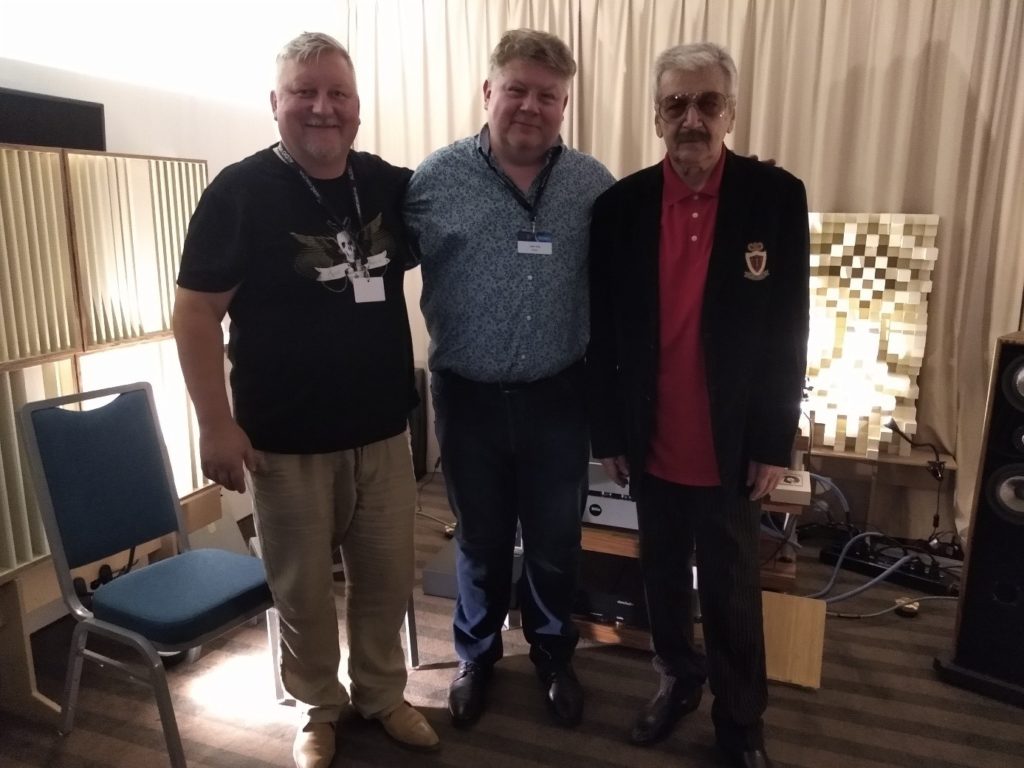 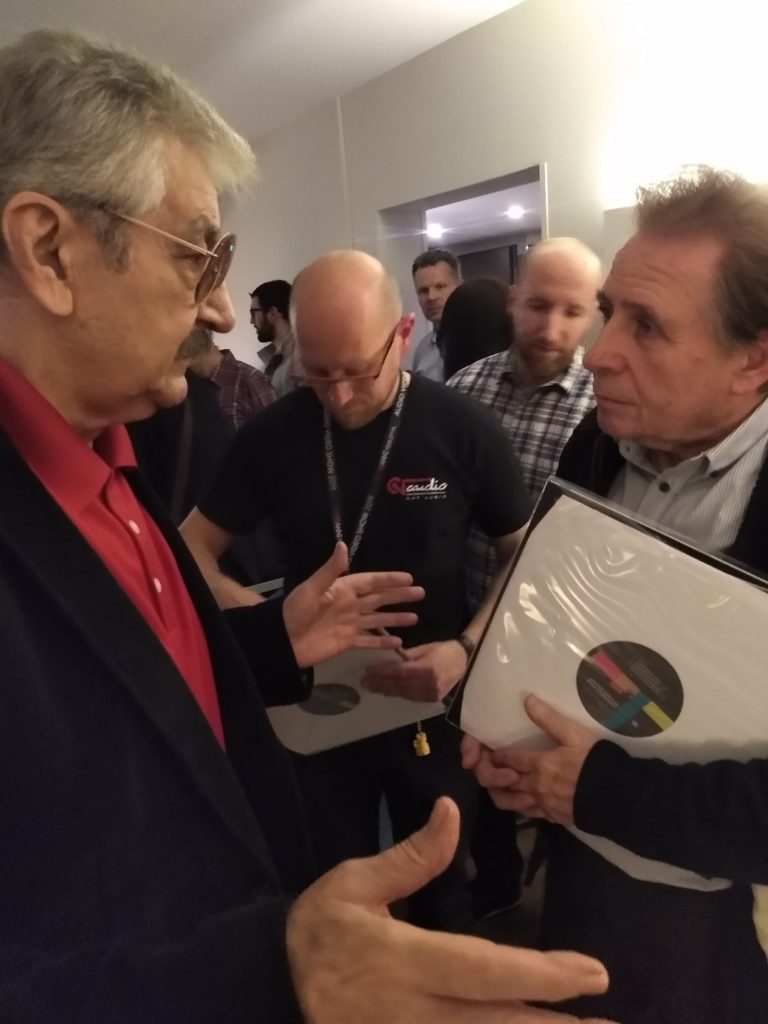 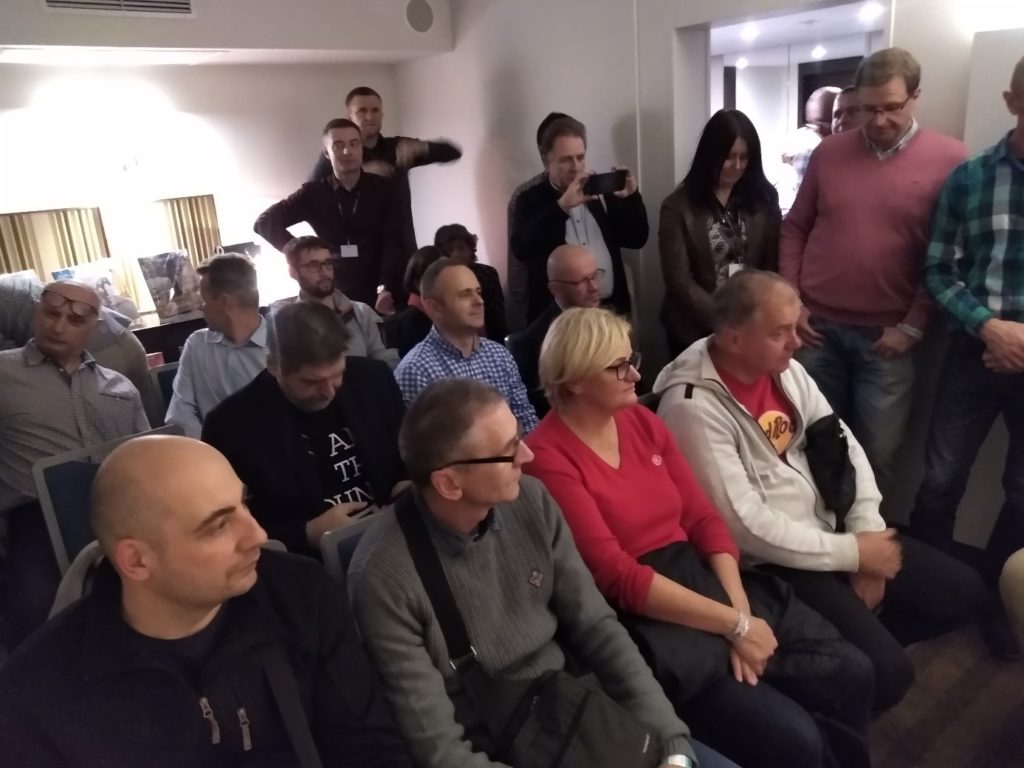 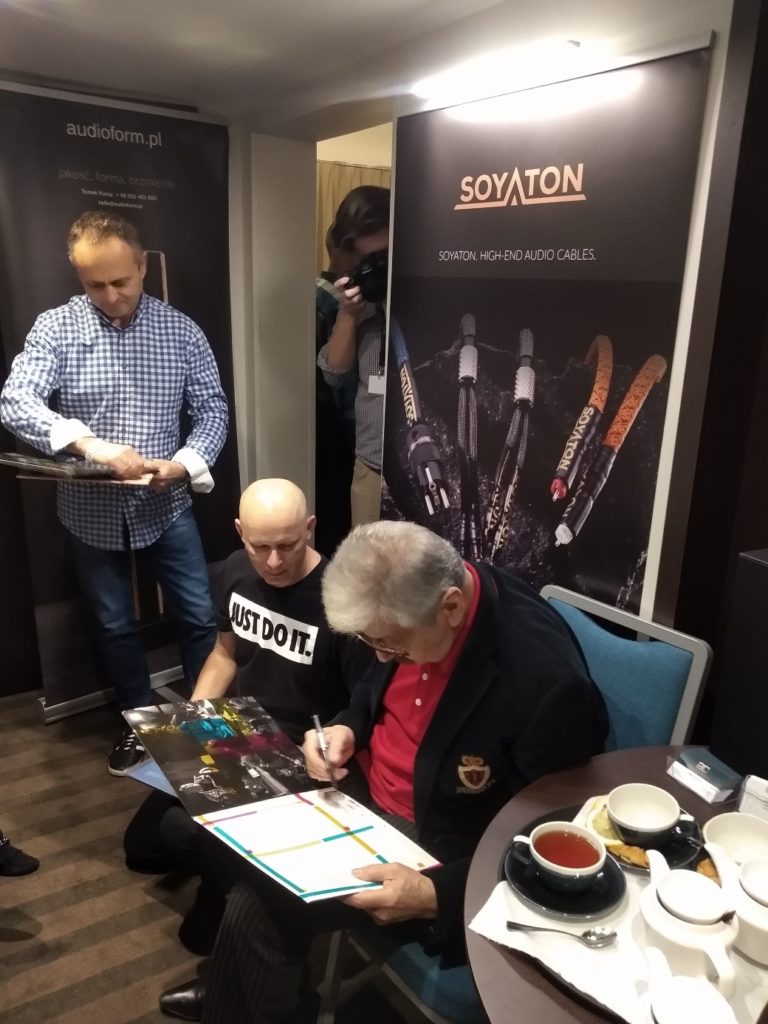 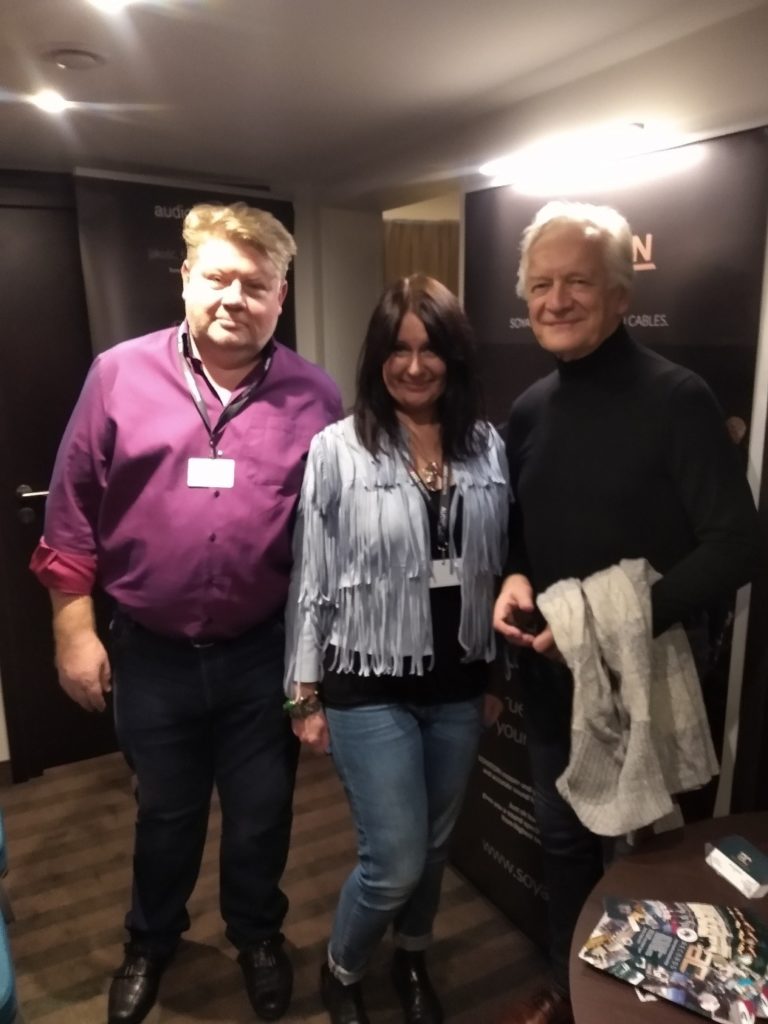 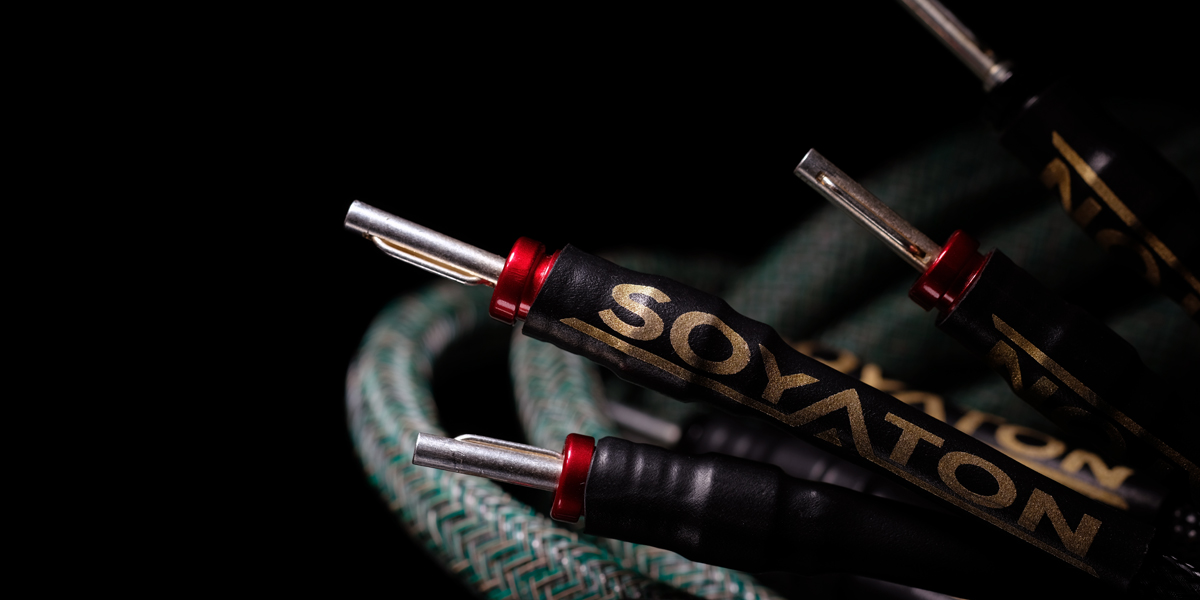 Dawid is a well experienced and respected independent journalist with great expertise in high end audio, publishing mostly on his own HFK, but associated and quoted on regular basis by the largest and most influential audio and music portal 6moons.com.

The build of the cables received a very high note. As Dawid wrote “due to its internal insulation also by design based on pretty much empty space, the far pricier Siltech Crown Princess speaker cable invoked the very much alike impression. The Benchmark is very light, bendy and even thinner, hence similarly easy to manage if not more. Its banana plugs feel unbreakable versus hollow BFAs. Over several weeks of usage and dozens of on/offs, not a single stunt these ends pulled. Due to inherent flexibility and no issues along the road, now I’m confident to say that Soyaton’s loudspeaker leash in fact can withstand a lot. (…) The Benchmark proved to be one of the most enjoyable loudspeaker cables I’ve had the pleasure of working with. On this count it positioned itself way up there with my LessLoss C-MARC, most likely a notch higher than Siltech ’s anniversary Crown Princess model and way above my Boenicke S3.”

In terms of sound characteristic Dawid noted i.a. that Soyaton cables are “strongly focused on humanely outlined virtual shapes, generously differentiated and applied musical tissue, overall vividness and everything painted on pristinely black backdrop. (…) The Benchmark very quickly positioned itself among cable specimens behaviourally fully adult and free from any flashiness or extremes. It’s quite the achievement to land a cable voiced like so and also free from abnormal temperature rise, excessive bloom, slow pace and truncated top end as by products. (Soyaton) didn’t suffer from any of these. (…) The Benchmark’s battle against the most tonally accurate and in general transparent cable I’m aware of – LessLoss C-MARC – showed several clear similarities in their performance. Both products sported quite identically black and very much alive backdrop. Both invoked the feeling of finely applied omnipresent darkness as the firm foundation, upon which everything else was built free from any hints of garishness. The Lithuanian did this via its clever internal noise-cancelling plot, whereas in Julian’s product the same effect was achieved via gold-plating. Two different measures, yet the base result was aurally pretty much the same. To move on, both specimens in my setup provided similar listening effortlessness, liquidity and completeness. Both allowed for intake of musical content digestibly and pleasantly enough to leave any signs of fatigue at the door. (…) The Benchmark was heftier in the upper bass band and bloomier, hence naturally the LessLoss sported slimmer attitude. (Soyaton) sported more romantic, intimate and relaxed approach. The Benchmark’s backbone is very much universal, whereas everything else it does is tastefully executed and not overdone.”

In summary Dawid said: “The Benchmark isn’t exactly affordable, however its ask reflects performance accurately, which is just the way it should be. I strongly believe that cables this costly should score high notes on refinement; smoothness, backdrop tidiness, textural generosity, sonic liquidity, spatial clarity plus freedom from juvenile excess in any direction and fatigue. The Benchmark easily fits the profile and there’s no question about that in my mind. But its core voicing supported via several twists netted the result extremely easy to intake and appreciate, also on point with constant sensation of overall completeness, expressiveness and deep connection with music. It takes skill and capable ears to land such a product, which is why the Soyaton audio house now has my full attention and I do look forward to Julian Soja’s next developments.” 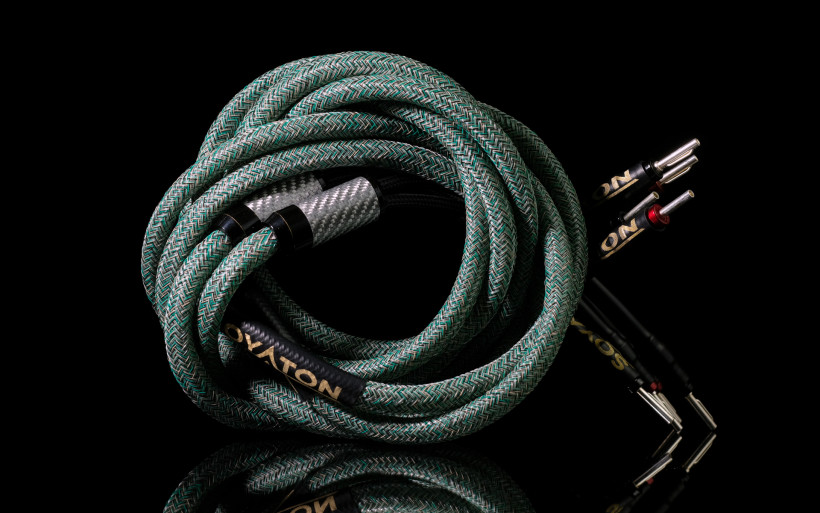